The more things change, the more they stay the same...and vice versa......or so the saying goes.

Funny how life throws different things at you, sometimes when you are least prepared to deal with them. Good fortune or bad fortune comes at seemingly random times. My car being stolen for instance....why now? Or rather, why ask why? It's just random.

Today, I had some random bad fortune. No details here. Suffice to say, some future plans have been put on hold or perhaps re-routed permanently. It's to early to tell at this point. The result of this was a bit of a kick in the balls type feeling for a couple of hours. A "now what" sensation with a bit of a blank stare from me.

After some time to think about it, I don't have an answer but some changes in several areas of my life are being made out of necessity.

I've been content to poke along in my trading. Just trying to be consistent over the weeks....with some degree of success at times and frustration at others.

Today though, as part of the changes previously mentioned, trading is taking center stage. The bad fortune involves money and the need to earn more than I am at least for the next several months. I know darn well that when you need to win, the chances go down that you will. In fact, the odds increase that losing will become more prevalent. That said, my trading business is now an integral part of the changes going forward and I commit to trading as though I were rolling in cash!!

I'm making no changes to my style, instead I plan to increase the number of potential trade opportunities each day and increase size as risk warrants. I've been very passive with size since I've been focused on just execution but the time has come to push myself and grow a pair as they say.

All trades will be with trend on the 5M chart. Risk will be under 15 ticks or trade will not be taken. I am willing to risk up to $500 per day and up to $300 per trade which means a 15 tick stop will result in two contracts being traded. I will max size based on these parameters as well as the quality of the trade presented and I will normally be looking for 2-3 times my risk in ticks as an exit point. This will be variable depending on market structure. Overall goal is to follow the process perfectly and let the money follow. If I can get an overall net of 2RR each day, I will consider the week a success.

Like Sandy, I intend to do a much better job of journaling my trades. There won't be videos at least not at first but I intend to detail the trade entry reason, aka, rules met, etc. Target ideas, thought process during the trade if I can remember why (I'll keep a note book handy for this) and today I finished tweaking my spreadsheet tracker. I emptied the contents and starting over from scratch tomorrow!

Trend days can be tough....even though the ranges are narrow, the buying seems to be pretty strong. After the move from short to long overnight, not a single pull back with smaller risk to buy.

I tried but it never got close. 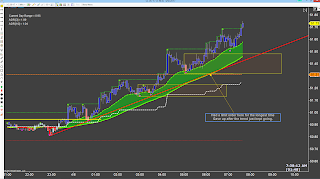 Posted by Pandawarrior at 7:40 AM No comments: