Lets think about this for a minute. I'm down around 5% over the last month. That's more than I want to see gone in a single month. But the truth is, its worse than it should have been had I reduced size quicker and better than what it probably would have been had I not simply stopped trading when I reached -1.0% for the day.

I've reduced size to a single lot going forward with a max risk per trade of .25%. However, today's actual risk was .125%. I held for 3X on this and ended the day with .50% return on capital. There was a few more ticks to be had on that trade but the planned exit worked well for me.

Honestly, the reduced size and the tiny risk made holding the trade much easier. Granted it wasn't a 100 tick win but I don't care. If I replicate this day over and over again, soon I will have regained all of the draw down and back toward building the account. That's all I care about at this point. Just slow steady returns over time and increase size when I'm comfortable with the increased risk.

A half percent per day is 10% per month. Assuming only ten months of the year traded that is 100% return over the year. Not bad for barely risking anything. I need to keep this in mind every day. Tiny risk, hold for at least a 3X multiple of risk and be satisfied with the baby steps. Occasionally conditions will present themselves where a 100 tick win is probable. I'll try to take those but honestly, I'll probably miss those. I'm not geared to look for those very often. They happen every week but my brain isn't wired like that for now. 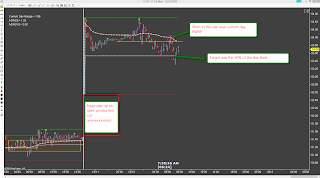 EDIT: 12:00 NOON. AZ TIME. There was a 100 tick move that began around 8AM my time. I'd left the office by then. Had I been here, I doubt I would have seen this developing and even if I had, I'm not sure I would have or could have taken it due to risk....might have had to look at a very small time frame to make this happen. Any way, here it is. 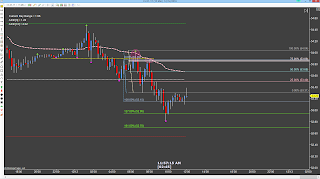 EDIT: 3:30 AZ TIME. After my last post, I started noticing the order flow was still quite active so I decided to see if there was any more left in the tank. I've also noticed near the close of the day, price tends to put in some large bars one way or the other. So I took a small risk, less than .125% was stopped out to the tick. I waited for another pull back, got in near the top of the pull back and rode it for enough to cover the stop out plus 3X on the current risk. Net for the day. 1.0% 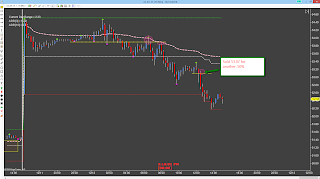 Posted by Pandawarrior at 7:42 AM 6 comments: