Tuesday I didn't trade due to technical difficulties and yesterday I fought the tape all morning and ended up -.2RR.

This morning, I could not build a case for longs and in hindsight, I'm still having trouble figuring out how I could have built the case in the hour or so before the open. My lower time frame charts were all long just before the open but that didn't fit with the short premise I had built. First two trades were stop outs for -.125% each. I reversed my last short into a long just after the open and held for enough to recoupe the losses plus a bit. Finally price reached the weekly VWAP which happened to be yesterday's VWAP as well as the 50% pull back on yesterday's candle. Price stalled there and I got in very near the top. No heat, and produced a net of 3RR for today.

After the initial long which I didn't believe in, I figured it might reach the area where I eventually shorted, but there didn't seem to be any real reason for it and I could really figure out a way to get in without something like a 1% risk position and since I'm not doing that at the moment, I sat idly by as price ground up and eventually reached the level where I guessed it might go....but by then, I'd built a new short premise off that level which worked.

I'm about .25% away from being break even on the year. I'm not happy about that for sure, break even is better than losing but I'm also not really happy about not being up 50-100%. Going into next year, my goals are to just grind it out like I have been the last couple of weeks. However, I do plan to begin scaling into trades a bit more and let at least some of that position run on days where it looks like I might be able to get a runner. I want to see if I can get a 5-10RR day once in a while to help make up for the losing days that are sure to come. 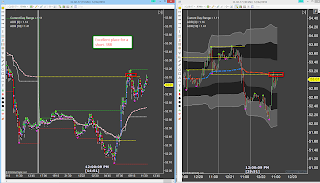 Posted by Pandawarrior at 12:13 PM