I had GREAT executions today in terms of trade locations....those green boxes, all entry areas. I even bought .10 when it spiked down only to be shaken out on the slow price action.....I kept trying multiple times in these areas....some scratched, some small losers and some small winners....No follow through....

And then, I bought one last time in the last green box. I held it for what seemed like way to long considering it sure looked like it should take off right away....and finally I decided it wasn't going to and bailed for a tiny winner....only to see it blast off on the NEXT bar. To say I was pissed was an understatement. This doesn't happen to me near as much as it used to but it still happens enough that I should have figured out something by now, as long as the trade premise is valid, just hold it.....but sitting there watching it fart around drove me nuts today....lots of five minute bars with less than 10 tick ranges....it can be infuriating.

Once it blasted off, I knew better than to sit there and try to find another trade. I'd trade out of anger and boredom and that is an account killer. So I just walked away. 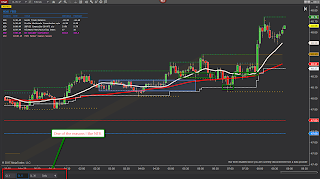 On another note, I'm probably only about 2-3 more days from abandoning my NT8 experiment. I like it overall but small fonts and lack of a couple of tools I use is renders it less than optimal. I'm giving it to Friday and then probably back to NT7 for next week.
Posted by Pandawarrior at 10:25 AM