Not killing it but not losing either

Just closing the gap between mental and emotional sloppiness and disciplined thinking. That is all I want to do right now. The big dollars will come.

Inventory day but I elected to try to be strategic about it and be patient and I was for the most part.

The pics tell the story but in the end, I got around 20 ticks total. The last trade was the one I was waiting for and yet all the waiting must have gotten to me. I took the trade, closed it, took it again and then bailed too soon. It did exactly what I thought it would do. Emotional capital expended fighting the urge to be stupid. It was better today for sure but still difficult.

The first chart is 30M and it made me a bit nervous to be trading either direction but I did take a short as noted on the second chart, a 5M chart. 10 ticks.

Third chart I had an order in that did not get filled but would have worked really well.

Done for the day, not unhappy about the analysis part, still have a gap to close between the mental aspect and the emotional aspect of this game. Perhaps for the first time in my trading endeavor I recognize the disconnect between the two. I always thought if you get the mental piece right, the market knowledge and the technical skill right, that would fix the emotional aspect. That was wrong headed thinking for sure. I have talked about it before at length but the actual awareness of the disconnect was missing. I know its there now and I can face it head on. 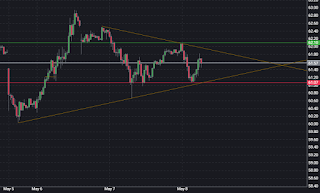 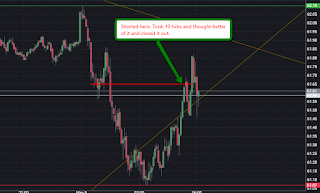 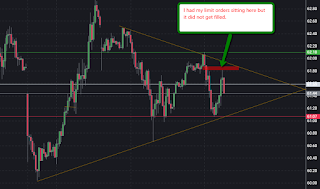 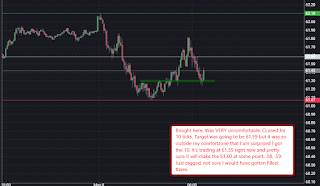 Posted by Pandawarrior at 7:03 AM