An odd day, I thought we might a bit of a pull back after the overnight run up and I did position short but it was right into gained support. I took that trade off with a small loser but I should have just reversed the trade.

Instead I took the pull back and it was very uncomfortable so I added to it on purpose to try to force myself to be in the moment and that made it worse. So I closed the trade for a small loss with double size.

Then with a clear head once more, re-took the trade and went to wake my daughter up. When I got back, my target of 78 ticks was filled and I looked like a hero. I fully expected that to happen but just not so fast. I was prepared to wait all morning if needed to let price work itself to that level.

I had seen the gap on the daily chart, and we were not that far away so I elected to stretch a bit and see if I could put on the trade and hold it long enough to reach it.

Overall, well done other than not seeing the longs in the first place but credit is due for being able to switch bias quickly enough to take advantage of it.

The only real thing I regret is taking off the first long as it was completely valid just super uncomfortable. 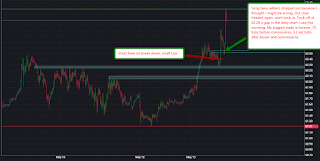 Posted by Pandawarrior at 6:36 AM