I really shouldn't trade on inventory days and yet something always draws me in. I think its because I'm up already, might as well see what's happening....FOMO maybe????

Anyway, I had a great entry into the long rally. My control bar gave me small risk and it went my way pretty quick.....and then it just stalled and went back and forth for 90 minutes. My pre-trade analysis showed resistance at .74 and I figured price would make it there before inventory THEN bounce around for a while and then have the whipsaw stop runs normally seen on inventory days.

But no, it went back and forth first and the longer it chopped around, the less patient I became, eventually I took it off somewhere in the middle of the range......and it THEN rocketed straight up after the number.

My early morning analysis showed it might see it hit .74 and reverse down. The longer it chopped around, the more I became convinced this was a very likely scenario. So I put in a limit order to go SHORT at .74 and saw my stop not only hit immediately but I got caught in the liquidity trap. The stop was actually ignored as price ran past it, the order got cancelled automatically and I had an open position going against me. So I just clicked the close all positions button and settled for a -2RR on that ill conceived trade. Well maybe it wasn't ill conceived but it was certainly against ALL my rules for the way I trade.

Now I'm out of the market as it moves in the direction all my crutches say its going to with no way to get in without significant risk so I stand down and just wait for the next area of resistance. That is on the daily chart and sure enough, it stops right there. After it spends some time chopping about, I put a limit order to go short near the top and sure enough, the price ladder starts going nuts right there. It goes my way for a bit and then it goes against me and misses my stop by 2 ticks. The bears hit it hard right there and price goes right back to my entry and it starts to look like the bears might win but at my entry price, the bulls step in, hit it hard and ran my stop pretty quick.

So what happens on inventory days so many times is this, I'm out of the market when the run happens and I'm forced to look for counter trend trades. Most of the time these take a LONG time to develop and then usually take a long time to pay off. I really do think I should just stand down on inventory days. I've said this over and over again. But perhaps I should actually follow through on this. This is the very definition of insanity.

Regardless, the limit short at .74 just before inventory while a well considered trade, was NOT an appropriate trade for me. The monkey brain was apparently in control even though I felt rational and in control. That is what deception feels like. Normal, but its only later you recognize the deception. The truth was, I should have been at the barest minimum, following my trend filter crutch and either still in the trade I entered 90 minutes earlier or buying the break out of the compression zone that formed just before the number. Either would have been just fine.

Yesterday I found out I can do a round the world trip hitting many of the places I want to go for about $10,000 per person. This isn't staying at the Four Seasons or anything like that but if I'm willing to put the effort into it, I can take my family around the world in about 60 days, see a fair number of stuff on my bucket list and be back before anyone notices I'm gone! So I'm setting a goal today of being in a place to cough up the $30,000 for all three of us to jump in the plane next summer, spend 60 days on the road and be back in time for my kiddo to start school. I already have the itinerary picked out. We might have to adjust it a bit depending on how things work out but I think its totally doable. I need to trade better than I am now but I feel it beginning to be real.

I want to be in the place where I can trade enough size to be able to make my daily nut without needing 50 ticks every day and being able to withdraw that daily nut without impacting my ability to trade that required size. I know this will come with time and more importantly, consistency but it does feel like its taking a long time. This week and last week have been with smaller size whereas the huge winning week were with essentially double my normal size. I'm going to be smaller size the remainder of this week but next week I think I am going to add at least one more lot and maybe two more lots later in the week.

Tomorrow I start a project that is projected to last for two months. It pays pretty damn well so I'm glad to have it but it will require a LOT of time. This will prevent as timely or perhaps as frequent postings. I will be trading every day but once I'll have limited time to trade and even more limited time for blogging. I will at a minimum do an update at least weekly depending on how demanding the timeline actually is. I will find out tomorrow. 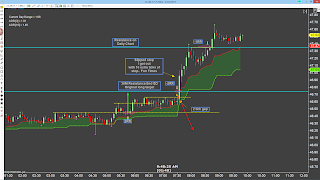 Posted by Pandawarrior at 11:54 AM