I've been complaining about the lack of volatility in the crude oil market. Well today we got it back in spades as the bulls finally took over after many days of selling. Of course this increased volatility is a double edge sword. On one hand, you can be wrong about the direction and still make money....on the other hand, the risk can often be so large it precludes us retail day traders from even thinking about being in the market.

I took a calculated risk shorting with a 1RR stop which was hit nearly immediately, which incidentally is how I like it. If I am wrong, I want to know right away, not hold for 30 minutes and then get hit. Once the stop was hit, some consolidation above the bull flag began and then it broke and ran without me. Of course there was a shot at getting in at the low tick of the move and I considered it but the nearly 50 ticks of risk put me off the trade. So I just let it go.

I came back about an hour later and saw we had made it to yesterday's mid point which is almost always good for a pull back. However, going in blind at a level like this in the face of all that buying is nearly always a terrible thing. However, it would have worked for about 20 ticks or so. I let the blind trade go and started looking for the Catholic Trade. For my justification of this, I submit a quote by the infamous Jessie Livermore.

“Don’t take action with a trade until the market, itself, confirms your opinion. Being a little late in a trade is insurance that your opinion is correct. In other words, don’t be an impatient trader.”
So I waited until price had taken out the high again but failed to close at or near the high, then I waited until two inside bars had formed and then instead of taking the break of the low which happened first, I sold the break of the high and then moved to break even after price had gone my way around 10-12 ticks. I set my target one tick below the recent swing low which just happened to be 30 ticks and sat back to wait. It took a bit of time, 25 minutes I think but it worked out just fine. Today I salute the Catholic Trade.
I made back my 1RR plus another 2.5RR. This means with yesterday's work, I ended the week positive although just barely after commissions. I think I netted 2-3 ticks for the week! Outstanding return on time and effort don't you think?
On another note, I've begun to step up my game with meditation. When I do it right, I feel great, when I do it wrong or barely do it, I feel ok but I also feel like I missed something that day. But the results are undeniable. When I meditate properly, it just seems like good things happen. I am excited to see where this experiment leads. Still have 2 weeks to go in the thirty day challenge.
Last thing today, I picked up a consulting gig that should start next week sometime. Should last about 2 months. It's with a firm that specializes in helping big banks either sue or defend themselves in lawsuits having to do with the housing bust and the ensuing foreclosure feeding frenzy. There was enough crime committed by the big banks during the foreclosure processes that everyone of them should be in jail but if you notice, not a single one is. They made more money doing foreclosures than they did selling the mortgages in the first place. Why you ask? Most of those mortgages were INSURED against default meaning if the homeowner defaulted, some insurer somewhere would pay a claim on that loan and the bank would not lose a dime! Then they took the home away from the homeowner often times in a faulty or illegal foreclosure using forged foreclosure documents and began selling those foreclosed homes into a rising market. It's still going on, banks have been holding many of those homes for 3-5 years now and are finally unloading them at these new inflated prices.  Tell me who is a good trader now!
This should start you thinking about whose interest the banks have at heart. It's not yours I promise you!
Anyway, the gig pays pretty good. I'll make enough in two months to cover the rest of the years living expenses I think. Might fall a bit short of the entire year but should be close. However, that also means my journal will more than likely consist of a screen shot of the days trades with little or no narrative. You'll have to figure it out for yourself!
And now today's chart. Oh, a note about charts. I did a lot of thinking over last weekend and this week and once again, I was reminded that simplicity is the ultimate sophistication. I had begun using multiple charts to find entries and exits. The more I did that, the more complex the decision making process became and the worse decisions I was actually making. So by yesterday, I had eliminated all but the five minute chart, a daily chart for some perspective and a 30 minute chart with a weekly VWAP on it because I think its pretty. The 5 minute chart is my main chart, its where I execute and make decisions from. Since I am not looking to hit 100 tick home runs, I don't need the perspective needed to make a 100 tick decisions. 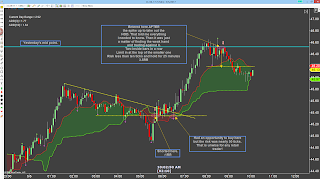 Posted by Pandawarrior at 10:47 AM

Email ThisBlogThis!Share to TwitterShare to FacebookShare to Pinterest
Labels: Lessons from the past