Two charts to show you.


The MP/VP chart...its messy but makes sense.....then the tick chart. I also have a daily minimized, a 120M, a 30M and a 5M stacked up on the right beside the tick chart. Those all have a single 89EMA on them.

The trading chart has an 89EMA, a 34 EMA and a multi EMA with 21 being the largest one of those....Charts were out of sync today against the  HTF but the 5M was in agreement with the tick chart and yesterday's VPOC and 50% level lined up and looked likely to be target areas. I went there twice with shorts....plus a bounce off the current day mid point and the current day Volume VAL. That trade worked as well.

Yesterday and Wednesday looked pretty similar in terms of how the trades were entered and exited. Nothing fancy, just getting in on the current dominate trend and taking bites where it appears most likely to work.

Interestingly enough, at least yesterday and today, Most of my trades were 2:1. I did not track it on Wednesday but I think it was more or less about the same. In that regard, I can win less than 50% of the time and still make money. Since I primarily like to risk $100 or less per contract per trade, when presented with risk of 5 ticks or less, I can trade larger size. This happened once today which was nice. So I risked $100 to make $200 once and $60 to make $100 twice. So that worked out to risking $220 to make $500. Just a bit better than a 2RR day!

If I am at the charts when all the time frames align, I might be able to to find 3 or 4:1 trades without having to wait as long for them to pay of as these did today. With a 5 tick risk (not going to see these all the time) and a 20 tick trade, I'm looking at 4:1 and that works for me. I can live with that.

I don't know if I am going to include charts all the time when I post but I've included them here for reference.

It's getting late and I'm feeling the effects of working almost around the clock this week. Tomorrow is sleep in day (til 7AM that is) some honey do's around the house, 3-4 hours of work and then perhaps a movie later in the day. On a side note, its supposed to 111 degrees tomorrow and 119 by Tuesday next week . That's 43.8 and 48.3 for those of you using Celsius! People say its not actually hell but you can see it from here!

Have a great weekend! 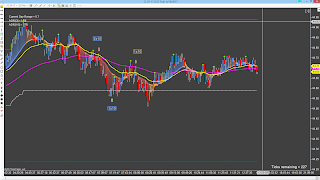 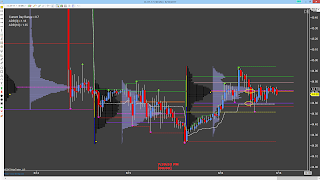 Posted by Pandawarrior at 9:22 PM