Well I made money today...and I made a decent amount...1% I think...which is fine...BUT I totally screwed up the read and the execution. I should have just bought and held!

On NQ, I was short early and it was a nice trade, Had I held it to the LOD, I think I might have been done at that point. But I exited at Friday's POC which was a nice trade. However, I was really expecting it to go to Friday's HOD and then bounce which it did but not until after some crazy swings at the open. I actually bought Friday's HOD and POC level but I took it off at 20 ticks because I didn't believe it would launch up like it did. Afterall, price action was directly into over head resistance. I was unprepared for that. However, once it started showing strength, I bought it twice more, each time for only 20 ticks, again because I was unconvinced of the true strength of the upward move. To be fair, I still not really convinced it was real even at this late junction. So I made 80 ticks on NQ when there was 228 ticks to be had.

On CL, I bought and then closed it immediately, then bought it again on the test of the lows where it held a perfect fib 78.6pull back level. I bought it at the inside break level and of course closed it right away. I thought it was going down. Afterall, it had rejected at the Friday VAL low level which is what it was supposed to do in a down trend. So I resold it again at the VAL and again at Friday's POC, both losers. Then I wanted to buy it at the ORH which it often retests after breaking out, no fill and I then just walked away from CL after that.

I think I overthought it. Instead of just going with the flow, I made assumptions about the firmness of VP levels when in fact, they are just that, levels subject to breakage. Price action and order flow at the levels are the key. I'm not proficient at that yet apparently.

Still I'm on a three day win streak. Haven't had that in a while. 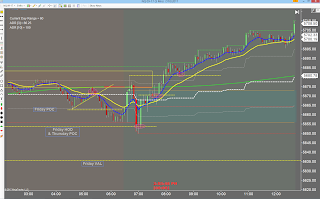 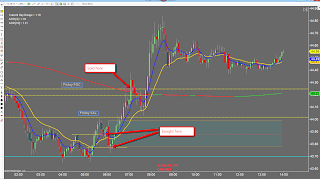 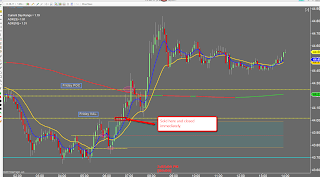 Posted by Pandawarrior at 3:15 PM