+1% and an emotional shit storm

Today is one of the most enlightening and interesting days I've ever had as a trader. Lets start by saying that I had a very nice counter trend trade today that I played very intelligently, very calmly executed almost to perfection. It was a nice winner as well. So why the emotional shit storm you ask?

Its like this. Looking at the charts, I had my entry levels off the profile, I scaled into the trade at each level with my overall risk mostly in line. To be fair, through the early part of the trade, there was slightly to much risk in terms of ticks but not excessively. I was comfortable with it because as it moved against me, the pace of the tape was quite slow with no aggressive buying at all. At no time did my dollar risk ever get past 1%.

As the tape moved in my favor, I knew my profit targets were realistic and probable. The only question was how long. I sat in this trade for about 2 1/2 hours. Something I have NEVER done before. Did I mention I hate counter trend trades? They take way to long in my opinion. However once the risk was out of the trade, I just forgot about it and let it play out into inventory. Just before inventory, I moved my stop to break even just in case it went against me with some violence. No need to take the stop plus any slippage. However, the trade was good and the inventory number filled my first two targets instantly. The runner wasn't really a runner, it was just a stretch number that I thought might get hit as well with the number. But no, it stopped a few ticks short, went back up and I exited the last position at BE+5 I think. I did move 2/3rds of the position up to aproximately the 50% level prior to inventory but this is not noted on the charts.

At that point, I was up over 1% having just executed a near perfect trade and yet I was left with a huge empty spot in my soul where normally I would have been fist pumping at having just scored a great win. The issue was this. The trade did not play out EXACTLY the way I thought it should and left me with less than I could have had with a full exit at the first target. To make matters worse, as I was marking my charts, price reversed and plunged right back down to where my stretch target had been. I think the whole thing took 3 minutes. So now instead of just being emotionally unsatisfied, I was just pissed about the whole thing. Seriously, I just made 1% and I'm upset? This should not be and yet I recognize this emotional dissatisfaction with a perfect trade is a very real aspect of trading. There is always a disconnect between taking what is offered at the moment and not seeing the future rewards or losses if you follow a different path.

I suppose this is something all successful traders experience. The thrill of winning but not winning big enough based on what happened after the trade is closed. Leaving money on the table. In sports, you win or lose. If you win, even by one run or one point, you celebrate the win. If you lose, even by one point, you still lost. Shake it off and play again tomorrow. In trading, if you win, it could have been MUCH bigger or if you lose, you could have cut the losses much sooner. It's a no win situation and if one is to be a long term success in this business, one must come to terms with this feeling and enjoy the satisfaction of following a well thought out process even if it doesn't work or if it yields much more than you actually achieved. The joy is in the process. The score is not the score. The score is just the result of the process. The process is the win.

Ok, here are the charts from beginning to end. Well there aren't any where the trade is firmly in profit because I was taking my daughter to school during that time. 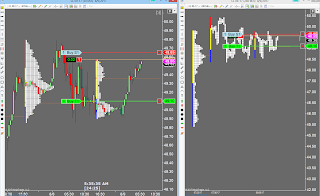 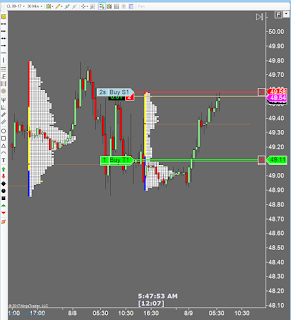 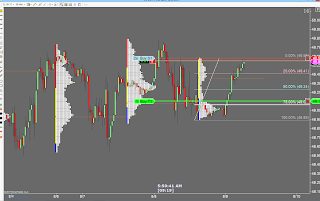 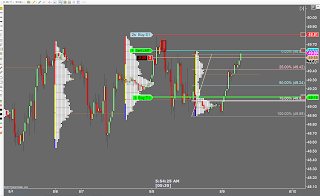 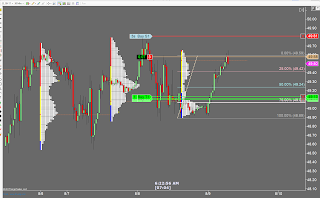 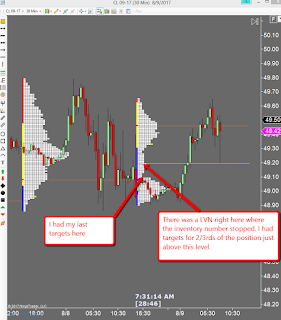 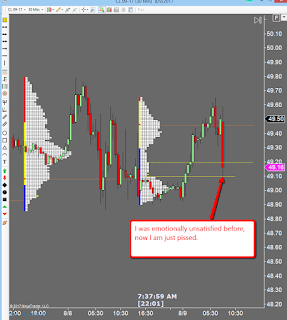 Posted by Pandawarrior at 8:01 AM