Last week was mostly a scratch week. I fell into the trap of trying to manufacture trades again. I realized my trade selection criteria is not very robust so on the advice of a friend, I implemented a higher time frame analysis using weekly and daily profile charts. I further implemented some rules about risk management having to do with trade count, daily, weekly and monthly draw down limits as well as the per trade risk.

My overall premise was sound, my execution was lacking because I ran out of patience with the initial sequence and I foolishly reversed my position because during the selection process, I made a case for both longs and shorts. The longs were not working as fast as I thought they should and so reversed into a short position only to realize the mistake shortly thereafter and reversed again, taking losses on both reverses.

However, keeping the risk in line with the above mentioned parameters allowed me to take the losers and add very quickly to the winner and overcome those losses and end up with a 1% win for the day. Oddly enough, the short case I laid out also worked well but I was long gone by that time. I had an early morning meeting and had to go.

A big thumbs up for the profit, a big thumbs down for the execution. Sometimes it works out like that. The goal is to minimize the size of the inevitable mistakes and maximize the size of the winners when you get it right. I may have gotten the selection process all screwed up as well. Maybe I should have been waiting on the short that happened after I was done. Small risk there with bigger reward....who knows. I made money following a step by step process and that is what counts. 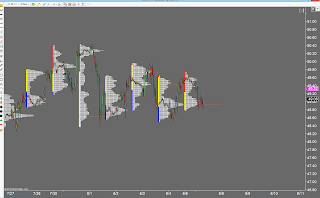 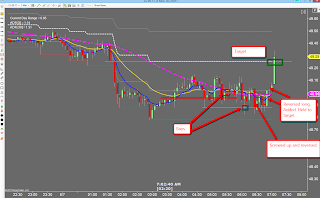 Posted by Pandawarrior at 2:40 PM