Did a stupid thing today.

Couldn't sleep last night, something I ate because my stomach made all sorts of unpleasent sounds all night long. After watching about 20-30 you tube videos, I decided to see what the market was doing.

I was long and tried to sleep while it was in progress but ended up not sleeping at all so got up to see it had went in my favor and then scratched out. I had a break even stop on it so I could sleep peacefully.

Then I finally got to sleep around 3:15ish and got up at 6AM. Made some coffee and decided to see what else I could find.

Turns out a nice trade area but I was so sleep deprived I should not have been making money decisions in that state. It worked but it was still the wrong thing to do.

Another thing that happened today was fear. I have been making new equity highs all week and I know it has been happening but this morning, I started thinking about it and I started to fear I would lose. I was able to suppress that fear and still trade well but that was a fear I have not felt in a long time.

I have decided to take a few days off and let the success this week settle in and let me get over new equity highs. 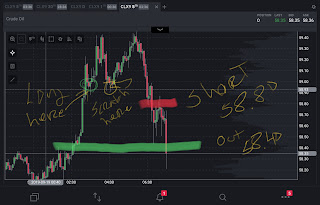 Posted by Pandawarrior at 7:12 AM